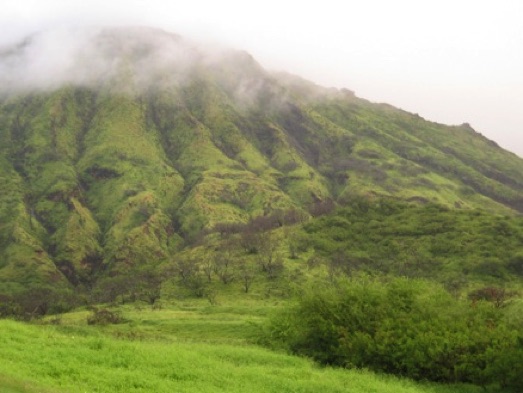 Kahauloa Crater, where The Koko Head Shooting Complex is located today, is legendarily the home of Hawaiian Menehune.

The rifle range background is Koko Crater or in Hawaiian Kohelepelepe or the inner lips of the vagina.  According to a racy legend, the pig demigod Kamapua'a hotly pursued the goddess of fire Pele on the Big Island.  The goddess Kapo, Pele's sister, detached her kohe (vagina) and flung it to eastern O'ahu to divert Kamapuaʻa.  The trick apparently worked because the pig demigod followed the so-called traveling vagina and left Pele alone.  The vaginal imprint became the crater known as Kohelepelepe.  (Hikers guide to O'ahu by Stuart M. Ball, Jr.)

. . . I am going to tell you about the hill called Kohelepelepe:  It is the hill close to the road at the great fishpond, and that fishpond is called Maunalua.  And the land belonging to that hill road, it is called the Kula of Kaea, and is is the place I came from, a place which is was told to me was really Waiakaaiea.  There is the picture cave (ke anaki’i) of the menehune.  The sea there is called Awa’awa’amalu.  And the other side is Hanauma Bay.