Lit., Sounding Knee (referring to the knee drum [puniu] attached to the knee).

Through radio carbon dating of wood charcoal obtained in the Kuliʻouʻou shelter . . . indicated that the wood of this charcoal was formed 946 years ago, plus or minus 180 years.

This means that the shelter was first occupied about 1000 years ago. . . . Several stone adzes found at the same depth are of characteristic Hawaiian form which was at one time used in Tahiti and the Marquesas but which has not appeared in any collection of stone adzes from Samoa or Tonga.  This indicates that the early Hawaiians came from the Marquesas or Tahiti.

to learn about small kid time in Kuli’ou’ou

to hear of his deep aloha for Kuli’ou’ou Valley

This picture on the left is of

is seated next to her on the ground.

This group photo of the Reeves and Correa  family was taken in the 1950’s.  In the center of the photo is the matriarch of the family, 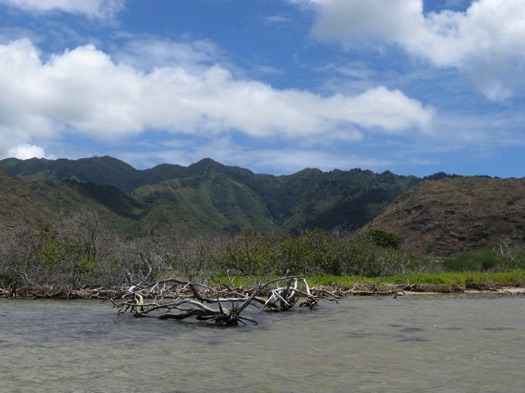 aerial view of Kuli'ou'ou Valley in the 1930s