Mr. Joseph "Joe" Lukela was the great Konohiki of Maunalua for over 50 years until his passing in 1966. 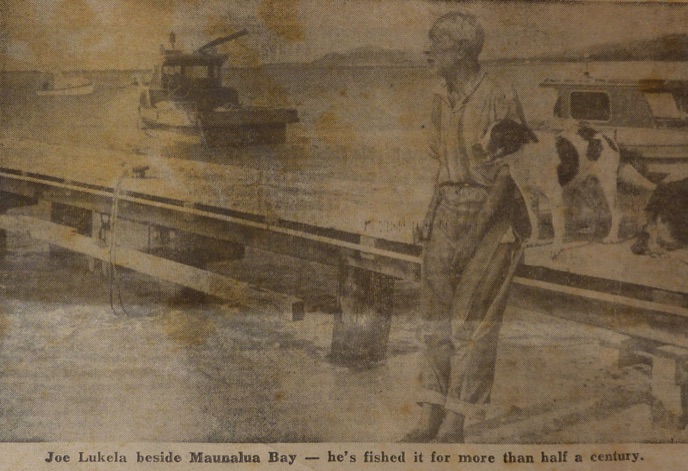 Joe Lukela was the famed Lawai’a (fisherman) of Maunalua Bay.  Lukela held the konihiki rights, a traditional concept of ocean resource management, for over fifty years in the ocean area from Kuliʻouʻou to Makapuʻu, until his death in 1966.  Lukela was respected for his traditional Hawaiian knowledge of the tides and currents and moon and stars.  The ocean would turn black with fish under his management of the massive schools of mullet and akule that migrated to Maunalua.  Lukela was also an expert in traditional Hawaiian navigation practices. He lived in a small fisherman’s shack on the beach across Kui Channel. Surrounding him was Loko Iʻa O Maunalua, the largest fishpond in all Hawai’i. He would await the yearly mullet arrival by opening the makaha or sluice gate to allow them to enter and replenish. Lukela is remembered as a great provider of fish for the community who would generously share from his harvests. He created a flag system to protect the spawning fish and insure there were always fish left for tomorrow.  We honor Joseph “Joe” Lukela for his Aloha for Maunalua Bay and for his love and practice of his Hawaiian culture which he passed down to his family, the Maunalua community and to future generations.