Gazing out from the Koko Head Lookout in Hawaii Kai, the ancient fishpond outlines are striking. Folks are always astonished when they learn these are actually filled fishponds.  Towards Diamond Head juts the forty one acre Wailupe Fishpond now known as Wailupe Peninsula. Next you can see Kupapa Fishpond at Niu now commonly known as Niu Peninsula.  The remnants of the former Maunalua Pond are what we know as Hawaii Kai Marina and the community of Hawaii Kai.

If you listen to former pond men like ninety year old Tokio “Fishy” Jodoi, he will take you back to a time when massive fishponds and freshwater springs made Maunalua Bay a famous fishery.  East Honolulu hosted the 523 acre Keahupua-o-Maunalua, the largest fishpond in the Hawaiian Islands. Mullet runs or ‘anae holo were a time honored event going back to the ancient legend of Kaihuopalaai.. “In 1944 or ‘45 after the flood we had acres and acres of four to five pound ‘ama’ama, as far as you could see” recalled Uncle Fishy. Fish would sometimes even cover the road, igniting a frenzy as motorists rushed to scoop them up.  During the fifties and sixties, Kaiser and Dillingham filled the ponds with dirt for housing. Afterwards the fishpond era slipped sadly into obscurity for many years.

Fortunately, the artesian fed ponds of Kalauha’eha’e and Kanewai were able to escape destruction. Despite their location along busy Kalanianaole Highway, few can guess that behind the blue government property signs and shady coconut trees lie the only intact shoreline ponds in Honolulu. These fishponds formerly combined to pump 400,000 daily gallons of fresh water into the ocean. After damage from highway work in the mid 1990’s the fish and limu or seaweed populations sharply declined.

The Role of Fresh Water

While Kalauha’eha’e and Kanewai may have been forgotten recently, for Hawaiians of old these cold freshwater ponds played a sacred life giving role in the health of the fishery. A glance at a map of the area highlights this.  Over and over we see the word “wai” used in such places as Waialae, Wailupe and Kawaihoa to name a few. Kanewai is literally the water of Kane. The god Kane is said to have caused numerous springs to gush forth between Hanauma and Le’ahi by striking the earth to save his companion Kanaloa from starving.

The numerous prayers and chants Hawaiians issued praising the life giving waters of Kane were for good reason. The recently deceased waterman John Kelly described the excitement of witnessing the fresh water pour through a makaha or fishpond gate into Maunalua Bay. “I was fishing one day out near Coco (sic) Head. There was the biggest Hawaiian fish pond there, the biggest one of its kind in all of Polynesia. An old man Lukela, was the Hawaiian in charge of this thing. I was standing next to him, we knew each other, and I had my throw net. There was a big school of mullet right off shore and so he started to lift the gate that opens the passageway into or out of the fish pond. It was 500 acres. He started to lift it and I said ‘Papa Lukela, you going to lose all your mullet, the tide is falling’. ‘Oh no Keone’ he says, ‘you watch’.

Today this fascinating process still occurs on a smaller scale at Kanewai Pond located behind Paiko Lagoon in Kuli’ou’ou. Juvenile aholehole charge against the current from the pond gate in a time honored ritual while just inside the pond groups of large barracuda stealthily lurk. While this pond is currently closed to the public, if properly restored it could play a significant role in renewing the fish and limu of the surrounding bay.

Keepers of the Ponds

The ponds in Maunalua Bay were kept in perfect balance by legendary figures such as Joe Lukela, the most famous fisherman of the district. Stories abound of how he would predict each November when the mullet would arrive.  He knew the ancient chants as well as how to read the clouds. When the fish were running he would navigate his sampan by the stars to Hana or Moloka’i without the use of a compass. Today Lukela Lane in Kalihi is named in his honor.

While Lukela passed away in 1966, one of the great living pond keepers is Mr. Tad Hara. Now in his eighties, Mr. Hara was raised in rural Opihikao near Kalapana, Hawai’i. When his father died, he was hanai by his next door neighbor a one armed fisherman and Hawaiian kahuna. Upon moving to Niu Valley on O’ahu, he was drawn to a unique glass floored home built over the ancient Kalauha’eha’e Fishpond. “This was flowing fresh water. It was something special because it was spring water coming out. Lots of water, lots of water, constantly flowing to the ocean. So I figured if I owned it, that’s my kuleana”.

Living over the pond, Mr. Hara became intimately connected with its rhythms and living creatures. Using a system of makaha and rock barriers he would carefully regulate the water flow into the pond. The pond connected to the ocean through a rock ‘auwai or ditch. At high tides sea water would flood into the ‘auwai and juvenile fish would gain access to the pond. “We mostly had a lot of aholehole and then you had mullet, awa, the prawn and some Samoan crabs in there too”. Although Mr. Hara often went whipping and poked squid (octopus) just outside, he saw the fish in the pond as his family and reserved them only for guests. “I have never eaten one fish from the pond” he said. His ‘aumakua was a specific balloonfish that would come to greet him in the ocean fronting the pond. Amazingly “It used to follow me up and down the beach” remembers Hara.

Numerous carp were also raised in the pond. “There was three carp in there that were tame. When I go in the pond I just slap the water and these three would come. Especially where the makaha was going out and the water flowing. I would clean over there because had the snails and bits of rubbish so I would clean it to make the water flow. They would come and swim underneath and slide their back along my hand if I leave it over there. I believe that pond had some kind of spirit that makes me happy” recalled Hara.

Today the ‘auwai that used to glow at night from the eyes of the ‘opae lolo is covered in sand. Next to the ‘auwai is a ragged piece of wood that used to stop the sand from entering the pond. The glass floored house sits silently with its paint peeling as tilapia quietly swirl beneath the surface.

However this may not be for long. Spurred by successful restorations at He’eia and other ponds, a new movement is growing in the community to restore Kalauha’eha’e. The goal is to use it to perpetuate traditional knowledge and practices as well as the best modern science. Current negotiations are under way with the State which owns the pond to ensure that the pond is properly stewarded once again.

The Maunalua Fishpond Heritage Center, a nonprofit organization comprised of long time residents, scientists and educators has been active in compiling the legacy of these fishponds. They are currently raising funds towards the goal of reopening the pond. The Center is also seeking companies or organizations to sponsor the costs of basic repairs. The organization can be contacted through its website at maunaluafishpondheritage.com. 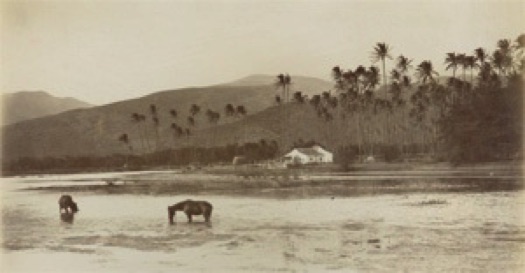