. . . . That hill yonder, forming the point, is Kaneapua’s hill.  There is an ‘awa container there but it is all broken up.

That was where Kane and Kanaloa drank ‘awa.

There was a pool near the point that was very strange.  One day it vanished.  Kane and Kanaloa sent their younger brother,

Kaneapua, to bring some water down from the top of the hill.  At the top of Lepelepe was a spring, Waiaka’aiea.  As the boy went after it,

he was told that he must not urinate on the way.  He carried a container in his hand and he was warned lest the urine enter the water.

The boy was seized with a great desire to urinate so he set aside the warning and relieved himself.  Strangely, the container filled when

he lifted it up and the spring dried up.

The brothers were waiting and when they saw that he had not obeyed, Kane told Kanaloa, “Thrust your cane down so that we may

have water for our ‘awa.”  Kanaloa thrusted his cane and water gushed out.  They had what they wanted and the water remained there.

It is gone now.

It is said that menstruating women made it dry up and vanish.   They (Kane and Kanaloa) made ready to go back to their home because

their brother did not heed their warning.  They went off and when their brother who was on his way back saw them he called and called

but no attention was paid to him.  He knew that he was in the wrong for not obeying and so he turned into the hill called Mo’okua o Kaneapua.  That hill begins where the telegraph  poles of Koko Head stand and runs in a straight line till it dips into the sea.  This is the hill mentioned. 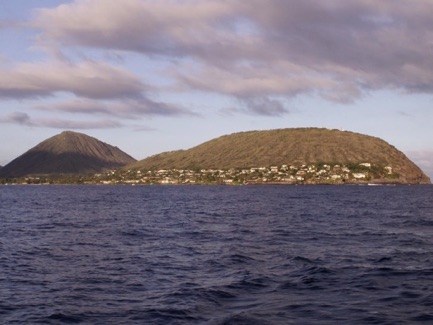