From the Great Locomotive Switch 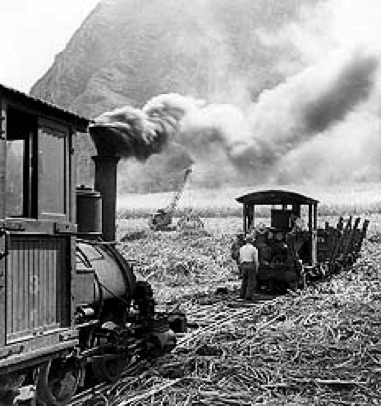 The Olomana spent 62 seasons working on a Hawaiian sugar plantation on the island of Oahu. When he saw it in California in the early 1950s, Walt Disney called the locomotive the nearest thing to a Mickey Mouse engine he had ever seen.

According to a Hawaiian dictionary, the name Olomana is a corruption of the English words "old man," but according to the donor of the engine to the Smithsonian, local Oahuans said the name referred an extinct volcano on the island and that the term meant "big noise" or "forked hill."

Whatever the case, Olomana came to the island in August 1883, after a two-month passage by sailing ship around Cape Horn from the Baldwin Locomotive Works of Philadelphia, Pennsylvania. It was the third locomotive to come to Oahu, in what was then the Kingdom of Hawaii. The Waimanalo Sugar Co. operated large plantations and a sugar refinery on the eastern end of the island, near Waimanalo Bay.

Gerald Best in the studio lot with Olomana, 1949.

After storage on a Hollywood backlot for a few years, Best moved Olomana in 1951 to the property of artist and animator Ward Kimball in San Gabriel, Ca. Kimball, one of the "grand old men" of Disney animation, had a private backyard narrow-gauge railroad: an enginehouse, water tower, tiny depot, a locomotive and passenger car which had formerly run in Nevada, and several hundred feet of track. Shaded by tall eucalyptus trees, Kimball's property was a celebrated landmark among rail buffs. An invitation to visit was prized -- even by Kimball's boss Walt Disney.

In 1952-53, Best and Kimball repaired and restored Olomana to jewel-like condition. In the process, Best took out the oil-fuel tank and changed the engine's fuel to wood -- mostly because Kimball's neighbors did not want black oil smoke wafting overhead. Best spent nearly $10,000 acquiring and restoring the engine, a heady sum in those days.

Disney visited San Gabriel often, delightedly donning engineer's cap and gloves and occasionally running Olomana. It was during one of those occasions that, according to Best and Kimball, Disney made his remark about the engine being entirely suitable for Mickey Mouse. Animated film lovers can recall the film, "Dumbo," in which the little steam engine "Casey Jr." struggles to start his circus train. Any resemblance between "Casey Jr." and Olomana may not be entirely coincidental. Although Olomana came to California almost a decade after "Dumbo" was made, rail-buff Kimball did much of the concept art and animation for that film.

From America on the Move

From the Smithsonian Collection

The Olomana was built by the Baldwin Locomotive Works, Philadelphia, for the Waimanolo Sugar Company of Oahu, then part of the Kindom of Hawaii.

It was the third locomotive to arrive on the island and was originally named the Puaalii. This narrow guage tank engine worked for 62 seasons, pulling cars of sugar cane from the fields to the processing plant located in northeastern Oahu. During this time few mechanical changes were made; however, the boiler was replaced twice and the fuel was changed from coal to oil in 1928.

During its service life the Olomana hauled or pushed small four wheel cars piled with sugar cane. The sticky juice from the cane lubricated the tracks so that extra sand was needed to imporve the engine's traction. The Olomana and other two locomotives were outfitted with extra sand boxes during their service. Traction, not speed, was the Olomana's chief concern. She was designed for slow speed pulling, with 20 mph an optimum, and normal running speeds far below that pace.

The Olomana was retired in 1944 when the 'sugar railroad' was abandoned in favor of motor trucks. Four years later the engine was purchased by Gerald M. Best of California. Mr. Best and his wife, Harriet B. Best, restored the engine and operated it on a private railroad in Los Angeles area before presenting it to the Smithsonian in 1977. 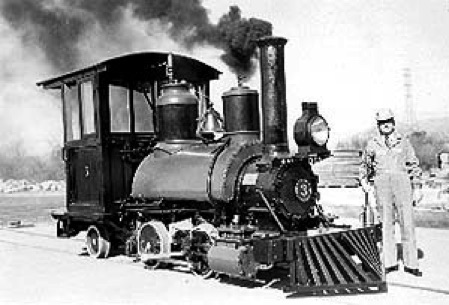